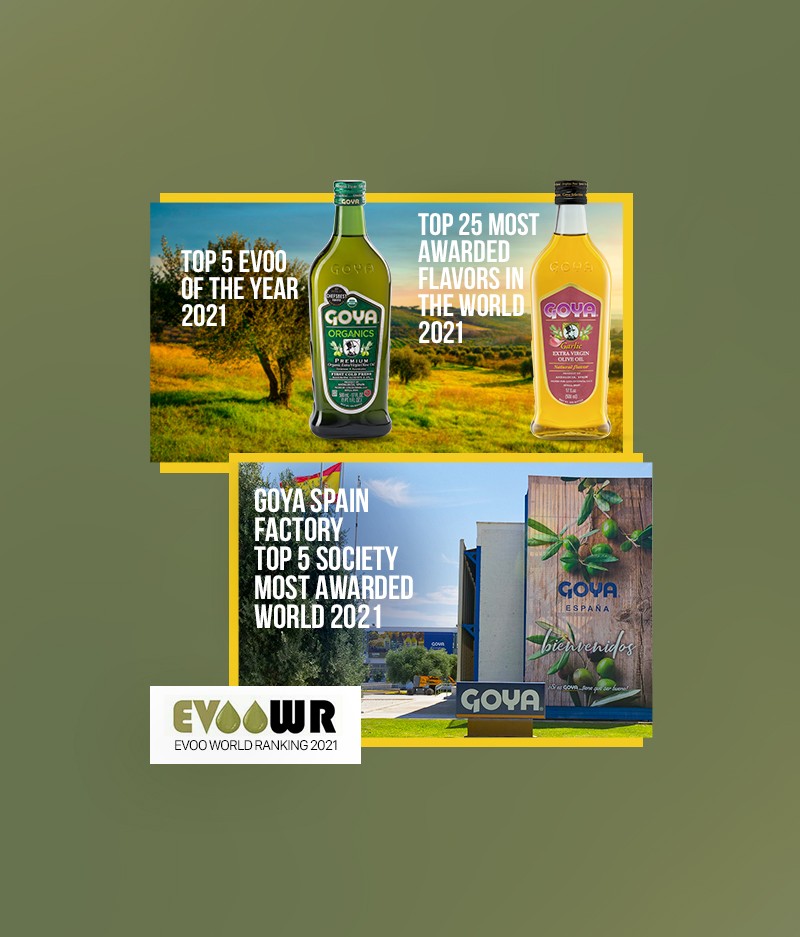 Goya revalidates its presence in the EVOO World Ranking

For yet another year, Goya extra virgin olive oils once again occupy the top positions in the EVOO World Ranking 2021.

Thus, Goya “Organics” has been placed in the Top 5 world ranking and 4th regarding Spanish oils. The Goya ¨Garlic¨ Extra Virgin Olive Oil (with a natural garlic aroma) is in the Top 25 flavored oils, the only Spanish representative compared to Greek flavored oils.

With a total of 1146.5 points, Goya “Organics” has achieved a total of 26 awards recognized by this ranking, including the platinum medal at the Berlin IOOC contest; gold medals in the CINVE, Olive Japan, NYIOOC 2021, Leone D’Oro, and Zurich 2021 competitions and as many silver medals and special mentions.

Furthermore, Goya “Garlic” has won 10 awards. Likewise, the presence of Goya oils in the ranking of the best oils is completed with Goya “Unico” and Goya “Robusto” in the Top 100 EVOO World Ranking 2021.

As the general manager of Goya Spain, Antonio Carrasco points out, “the inclusion of our oils in the EVOO World Ranking 2021 confirms our commitment to offering a product that combines quality, tradition and the origin of the best raw materials, with over 200 international awards”.

In the olive oil companies ranking, the Goya factory in Seville (Spain) revalidates its position in the Top 5 of olive oil production and packaging companies globally, with 2,988.25 points and 71 awards obtained in 24 contests.

The EVOO World Ranking  ranks the most awarded extra virgin olive oils in blind tastings carried out by specialized international juries. The 2021 edition has analyzed 16,584 olive oil samples from 37 countries and 2,105 firms that have been distinguished in 29 international contests.

10 foods that keep your body and mind strong!