Goya® EVOOs, will be present at Alimentaria 2022 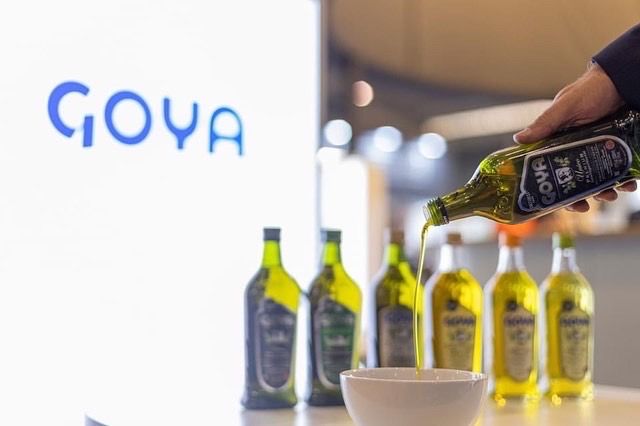 Alimentaria 2022 returns to Barcelona from April 4 to 7 with “The Olive Oil Bar”, a tasting space for international extra virgin olive oils. Goya extra virgin olive oils will be present at the Alimentaria gastronomy fair held in Barcelona from April 4 to 7. Much like the 2018 edition, Goya EVOOs will feature at “The Olive Oil Bar”, […] 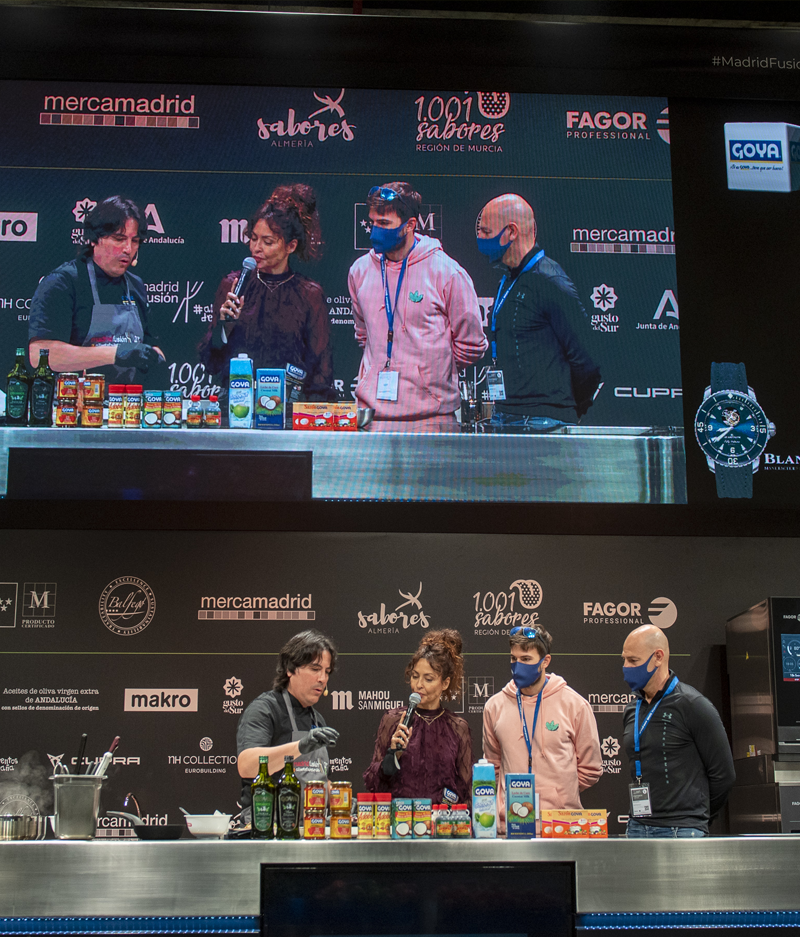 GOYA® Unico and GOYA® “Organics” premium olive oils were present at the 10th Madrid Fusión 2022 gastronomy fair under the slogan “Beyond the product”, bringing together the world’s leading chefs from March 28 to 30. For the fifth consecutive year, Goya was represented by Fernando Desa, Chef ejecutivo de Goya Europa, who offered the show cooking titled “Dale al coco… […]

Goya Spain will be present at Anuga 2021 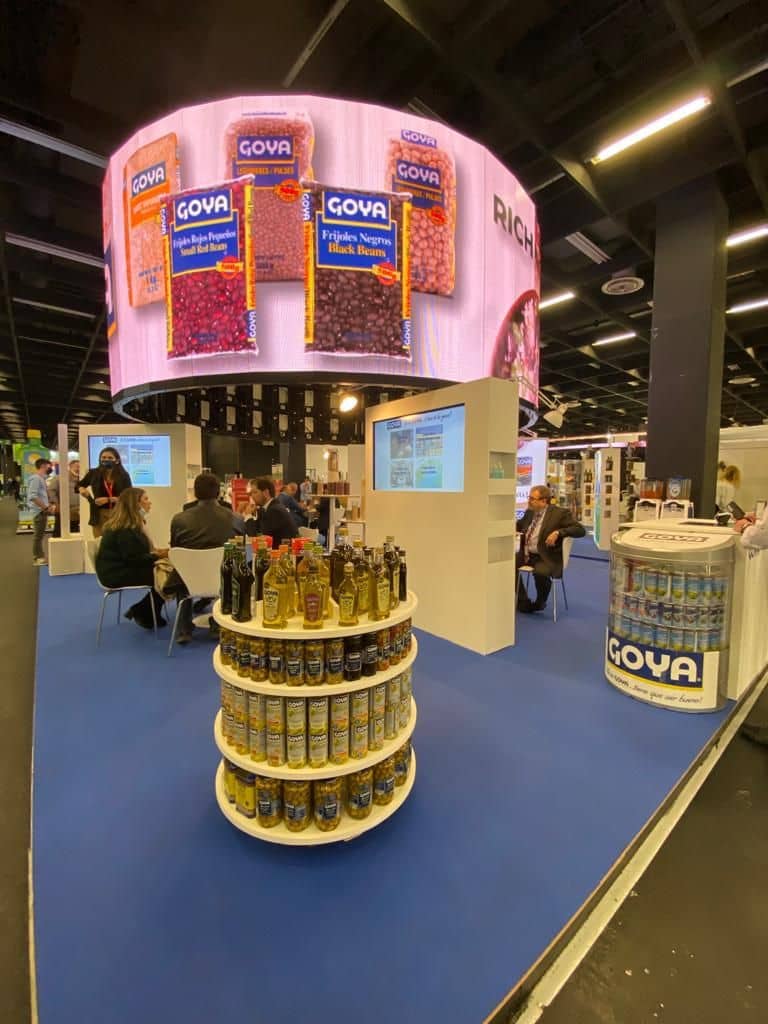 Grand events are back on track! We will be showcasing our products at Anuga2021, the leading global food and beverage industry trade fair in Cologne,Germany, from October 9th to the 13th. Visit us and discover our olive oils and table olives with the authentic taste of Spain. Met us at Hall 11.2-Stand: C010 D011 (Goya Europa Stand). +Info about Anuga 2021 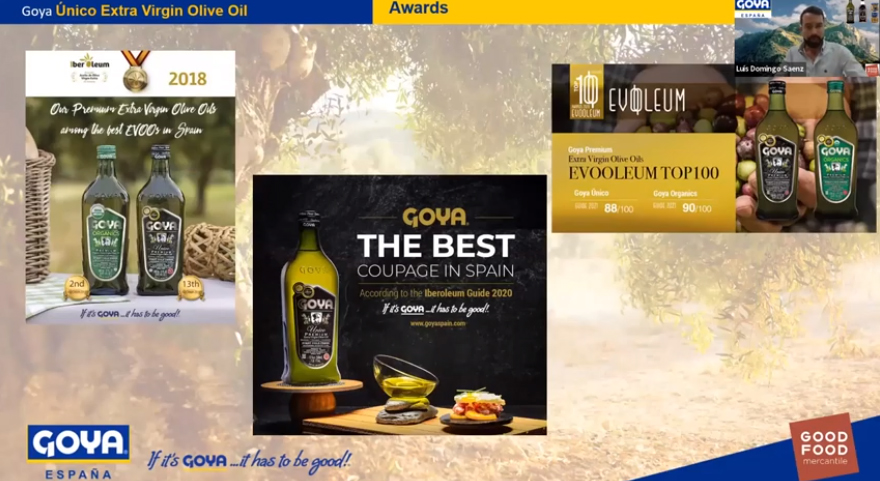 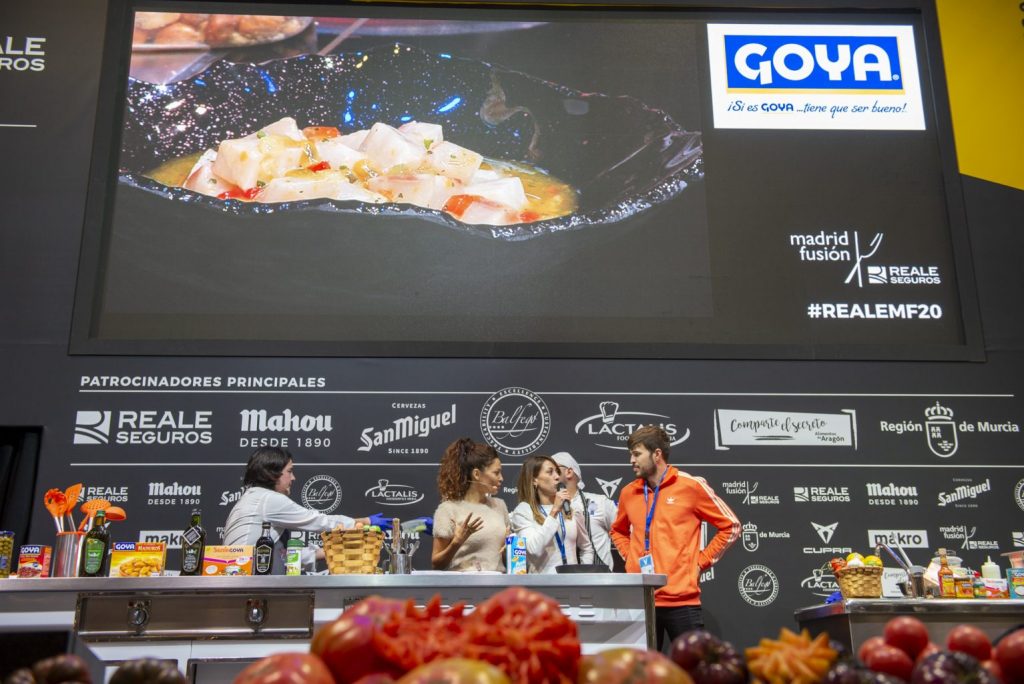 As is becoming a regular occurrence, Goya Gourmet Oils have featured prominently at the Madrid Fusión Trade Fair. In the 2020 edition, Único and Organics extra virgin olive oils were used in the recipes prepared by the executive chef of Goya Foods, Fernando Desa, during the Showcooking “Unanue: the cuisine of yesterday and today”. Desa […] 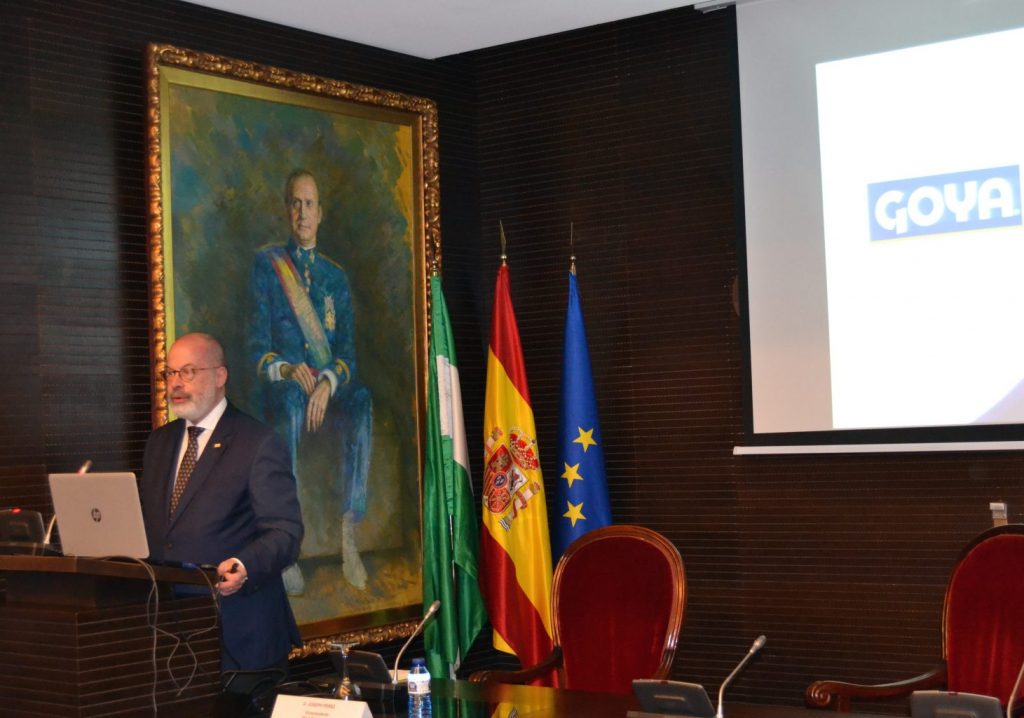 Goya Foods has been present at the IX Spain-USA Business Forum, a business meeting organized last november by the Seville Chamber of Commerce, to analyze US trade policies.

Next November 16th, in the Lehman Center for the Performing Arts in the Bronx (New York) will take place “Celia Cruz, The Musical”. This musical show, which is sponsored by Goya Foods, will be a two-hour celebration that feature Celia’s signature style and some of her biggest musical hits like “Quimbara”, “Tu Voz”, “Bemba Colorá” […] 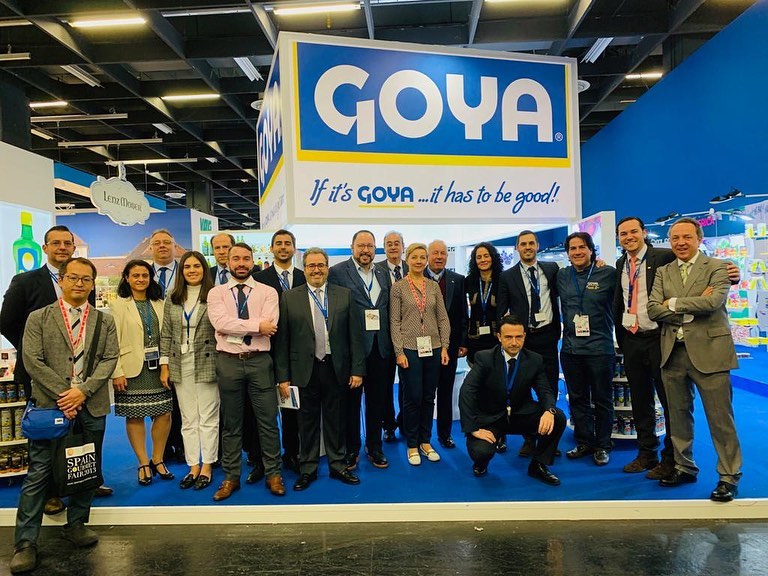 Once again, the ANUGA food and beverage trade fair, held in Cologne (Germany), was attended by Goya Spain. During the show, our table olives and olive oils have had a special role within the Goya stand. As in the 2017 edition, we wanted to bring the flavor and essence of the Andalusian olive grove. Thus, Fernando […]

Goya Spain will be present at Anuga 2019

Goya Spain will be present at Anuga 2019 “Taste the Future”, the most important international fair for the agri-food sector and aimed at an exclusively professional audience, which will take place in Cologne (Germany) from 5th – 9th October. As in the 2017 edition, Goya Spain will show its products: gourmet olive oils, olives, gazpacho and vinegars . […]

Goya Spain shows its products at the Olive Japan Show 2019 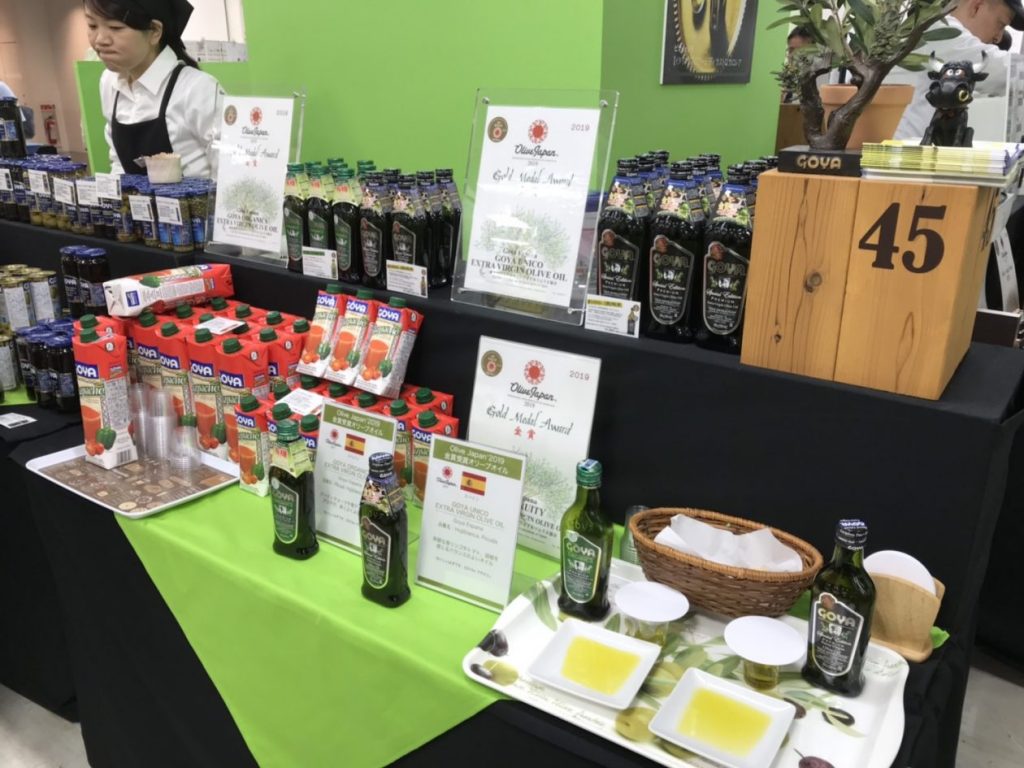 Together with our distributor in Japan Imai Limited, we have been present again at the “Olive Japan Show 2019”, an event organized by Olive Japan and The Olive Oil Sommelier Association of Japan. This year, Olive Japan (formerly known as “Olive Marche”), has been hosted by Seibu, the largest Department Store in Downtown Tokyo. With an […]

Goya attended the Summer Fancy Food Show New York, the largest specialty food industry event in North America, and the premier showcase for industry innovation, which was held in June 23-25. The attendees joined and experienced more new and exciting events, programs, and exhibitors than ever before. As the best place to see and taste […] 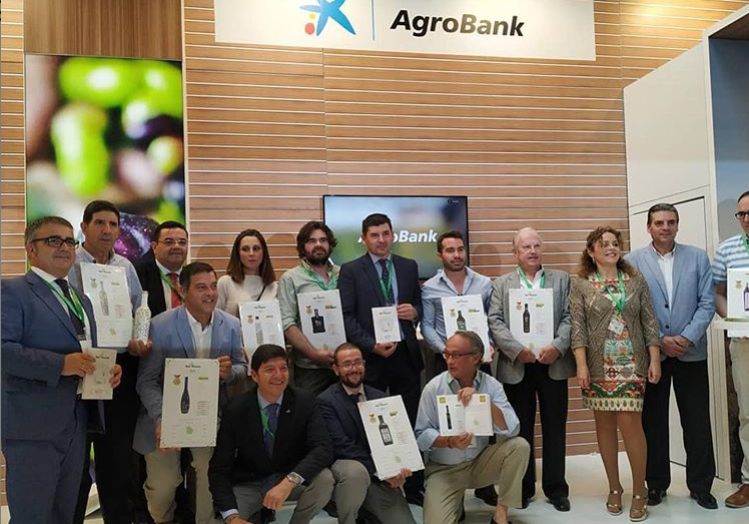 Goya Spain has been present at Expoliva 2019, the International Fair of Olive Oil and Allied Industries held in Jaén.

You want to be a distributor?